“Better than anything else I’ve tried before”

“Better than anything else I’ve tried before”

Karin Truedsson is an active 36-year-old with a family and children. She leads a busy life, both at home and at work. As part of her job at Smittskydd Halland, she often takes part in meetings and lectures involving anything from five to up to a hundred participants.

Her job is to provide information, coordination and training to people to help prevent the spread of infectious disease.

I won’t let my hearing loss stop me

“I suffer from hearing loss, but I don’t want it to stop me from doing all the things I can and want to do. It was totally by chance that I found out that modern technical aids exist that really make a difference. The Roger Table Mic, for example.”

You can never be a pilot

Karin suffers from congenital hearing loss, which was discovered when she was around 11 years old. Hearing loss is often detected earlier than that in children – when they’re late talkers, for example. But Karin learned to talk unusually early. She didn’t have to compete with siblings for attention, she was able to develop her speech and she got by with what hearing she had. When she was in fifth grade, they did a routine hearing check on the students.

– That was when my hearing loss was discovered. I was called in to see the school nurse and then shuttled back and forth between the hospitals in Örebro and Lindesberg for checks. I just sat and pressed the test buttons at random. All I wanted was to get out of there. In the end, I found out I’d been suffering from hearing loss since birth and I couldn’t be a pilot. That didn’t really worry me very much. I just carried on as usual, and it wasn’t until I got to college that I had problems.

The lecture halls were huge, the acoustics were awful and I had a hard time taking notes. I sat and stared at the lecturers so that I could read their lips, but as soon as I looked away I couldn’t follow what they were saying. I couldn’t hear a thing.

A new world, but not good enough

It wasn’t until 2005 that Karin got help.
– On the first day I used my hearing aids, I called my husband and told him there was a sound coming from the light switch and that the water made a noise when it came out of the faucet. That was really quite an experience.

But even though a new world had opened up to Karin thanks to her hearing aids, she was still having problems. She’d been given an older type of hearing aid that didn’t filter out certain sounds.

– I was really tired after a day wearing my hearing aids – completely exhausted, in a way I’ve never experienced before. I was absolutely incapable of anything after a day at work. When I got home, I took out my hearing aids so that I could enjoy the silence. I’m an active person and I enjoy being outdoors, exercising, spending time with my family and friends. I wasn’t happy, and I only used my hearing aids occasionally. 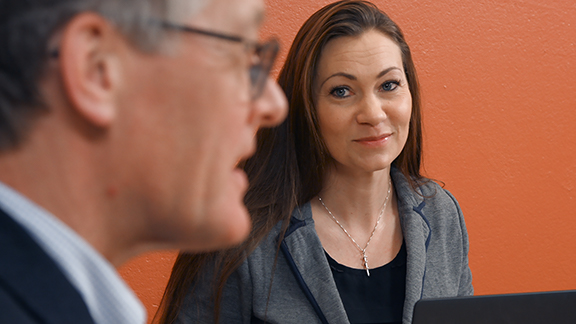 “I feel 100 percent secure in the knowledge that I’m hearing everything correctly, and that’s a wonderful feeling.”

But then, quite by accident, everything changed again. In early 2015, Karin’s colleague, an ENT specialist, asked her whether she’d like to take part in a lecture and tell people what living with hearing loss is like.

– When I’d done my lecture, I hung around and listened to other people talking. They were mentioning new technical solutions and the products available. And that was when I realized my hearing aids were ancient. So I got in touch with the medical services and ended up meeting a really good audiologist who talked with me about what I actually needed. I’ve got some amazing hearing aids now. But if I hadn’t gone to that lecture, I’d never have known that such great products exist.

From five to a hundred

An ordinary working day for Karin involves a lot of ordinary office work, sometimes a couple of meetings as well, and lectures take place regularly – sometimes involving five people, and sometimes with up to a hundred participants.

– I usually tell people that I suffer from hearing loss, but not always. When I meet new people, I sometimes worry whether I’m hearing them correctly, whether I’m asking them the wrong questions or just coming up with non sequiturs. At lectures, I’m often unable to hear questions from people sitting way in the back.

–We answer questions, provide information and train medical care staff and the general public, but we also spend time at schools and preschools. Smittskydd Halland would also act as coordinator in the event of an outbreak of infectious disease and works in partnership with other infectious disease control units in Sweden.

These days, Karin wears her hearing aids at meetings and lectures every day.

– I use the Comfort Digisystem and I’m really pleased with it, but I’m currently acting as the guinea pig for the new Roger Table Mic. I have to say, I like it even better – because I can set out several microphones in the room, and because I don’t need to wonder where I should put the microphone for optimum sound capture. We often arrange the tables in a horseshoe shape for larger meetings. The Roger Table Mic offers circular sound capture which captures the sound from participants around the tables really well. This equipment is really simple and easy to use.

Wants to spread the word

Being unable to hear can ruin your self-confidence and make you feel like you’re not as good as other people.

– I’ve always had plenty of self-confidence, thank goodness, and I’ve never been ashamed about my hearing loss,” says Karin. “But I’m the kind of person who wants to give my best and I have important knowledge and information to impart at work, just like many other people. And when I do that, I want to feel secure. My hearing loss can’t be allowed to get in my way. And it doesn’t need to. In a way, I feel that it’s my duty to tell people of all ages who are suffering from hearing loss that this technology is available to them, that there are some amazing aids out there today. I hope I’ve made a difference for someone.

The Roger Table Mic looks like a little silver box with rounded corners. An LED shines in the round circle on the top, indicating that the advanced technology inside is ready to use.

– If I forget to tell people in meetings what it is, they often sit poking at it. When I tell them what they have in front of them on the table, they’re often impressed by the advances in technology and that such great aids are available.

The security of actually being able to hear

By far the biggest benefit of the Roger Table Mic is that Karin knows for sure what’s being said in the room.

– I feel 100 percent secure in the knowledge that I’m hearing everything correctly, and that’s a fantastic feeling. I don’t need to strain to hear as much, so I never feel completely drained after a day at work anymore. I can be the active person I want to be, together with my family. It’s made a huge difference in my life.

Contact us for more information and/or get a free trial!